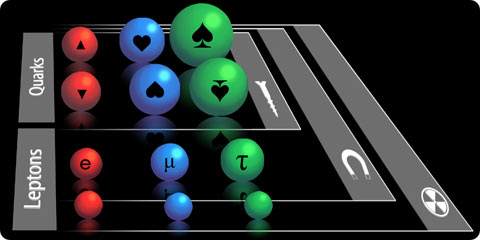 According to our present-day knowledge, all physical processes can be attributed to four different fundamental forces (interactions). The macrocosm is governed by gravitation. It determines the movement of planets and stars. The electromagnetic force acts at the level of atoms and molecules. It affects any electrically charged fundamental particle (that's half of the leptons and all the quarks). It's the same force that makes lightning strike and different poles of bar magnets attract each other. The weak force is responsible for radioactive decays. It actually makes neutrons turn into protons, amongst other things, and every type of matter particle experiences it. Finally, the strong force acts between quarks and between nucleons or, in general, between hadrons. It thus holds the atomic nucleus together.

Photons are the exchange particles of the electromagnetic force. Under the laws of quantum electrodynamics (QED), photons carry the electric force but are themselves charge neutral. In other words, there is no positive or negative photon, meaning two photons don't bind to form a "lightball." But under the theory of quantum chromodynamics (QCD), it is believed that gluons carry a charge, in this case a "color" charge. Because they have color charge, two gluons can bind to form a color-neutral particle, a "glueball.". Physicists are eager to experimentally verify glueballs because their existence, which to this day has only been hypothesized, is one of the key features that distinguishes QCD from QED -- two theories that are used to explain the strong nuclear force and the electromagnetic force, respectively.

The Standard Model is a very comprehensive, but still incomplete theory of the microcosm. It has answered many fundamental questions on the structure and stability of matter. But above all the strong interaction still retains mysteries, also because its mathematical description becomes very complicated with increasing distance between the particles involved. To solve these mysteries, physicists constantly have particles impinge on each other at nearly the speed of light in huge machines. One special feature is so far largely unexplored imprisonment of the quarks in protons or neutrons -- the confinement. Strong interactions between quarks differ strongly from electromagnetic interactions, which are responsible, for example, for the attraction of two magnets. As the two magnets are moved apart, the force between them becomes increasingly weaker, until they finally no longer attract each other noticeably. They are free. However, this does not work with quarks. If a quark is withdrawn from a proton, for example, a sort of tube composed of gluons is formed between this quark and the two quarks left in the residual proton, similar to a rubber band or a spring. The further the quark is drawn out, the more the rubber band is stretched. Since this requires energy, the energy of the band increases. Eventually, it is so high that, according to EInstein's law on the equivalence of energy and mass, it is more favorable to create a new quark-antiquark pair. The drawn-out quark unites with the newly generated antiquark forming a meson (= quark-antiquark pair), whereas the newly produced quark forms a baryon (= three-quark particle) with the two remaining quarks in the residual proton. It will therefore be impossible to withdraw a quark from a proton and subsequently observe it as a free quark. At least one new meson will always be produced. This property of the strong interaction is called confinement (imprisonment of quarks in hadrons). The task of hadron physics is to quantitatively understand this largely unexplored phenomenon within the framework of the strong interaction.